How a Rock Band Used Social Media to Make an Album

A little over a decade ago, Earthtone9 was taking the UK by storm. Having just released an album that was voted 16th best album of 2000 by heavy metal magazine Metal Hammer, the band was getting ready to break into the U.S. metal scene.

Unfortunately, around that same time, a number of things caused the band to “implode,” according to guitarist Owen Packard.

After a hiatus of about eight years, Earthtone9 got back together in 2010 for a few festivals. Things went so well that the band decided to record some new material.

This time around, however, the band didn’t have the support of a record label and had to rely entirely on fans to remember the old music and fund the new.

Now, with a new EP out and a new album due in December, it’s clear that Earthtone9 found a way to make things work.

Here’s how they did it: 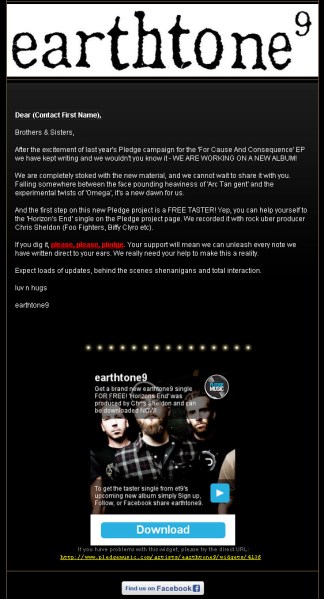 When the band first started touring again, they promoted an album that was a compilation of their greatest hits and was now available for free.

“We sent people to our website and then asked for an email from anyone who wanted to download the album,” Owen says. 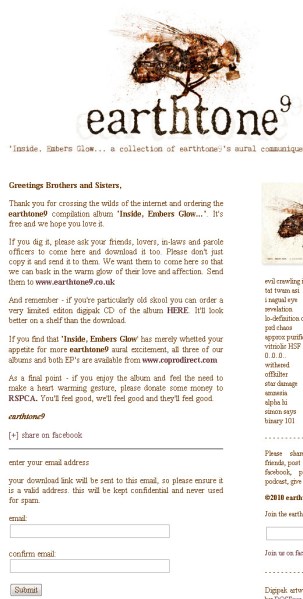 Earthtone9 used fliers and posters to help spread the word even further.

The advantage here was that the band didn’t have to make any new material, just redistribute old songs. But, in the process, they obtained email addresses from old and new fans so they could send emails about upcoming shows and songs.

The band used email marketing in early 2011 to announce their first tour in years and, shortly after that, announced that a new EP would be available, if they got enough help from fan-funding service Pledge Music.

This is a prime example of content marketing: giving away quality content for free can get people interested in your next big thing, be it product or album, and email-gating that content is a a great way to generate & capture leads. 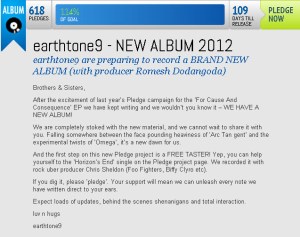 Rather than trying to get a record label’s attention, Earthtone9 decided that they would go straight to their fans for help.

Email marketing and Facebook were essential when it came to making that request.

“Constant Contact has really tied into everything, because we constantly hit up our database to let them know more information or send them some snippets of tracks,” Owen says.

It helped, of course, that over the past two years, the free album had helped generate over 6,000 fan email addresses. That way, whenever a new development was on the horizon, Owen could let fans know immediately.

So, when Earthtone9 asked for donations to make a new EP, “For Cause and Consequence,” the Pledge Music goal was reached in just six days.

Thanks to that enthusiasm, the band started thinking about recording a whole new album.

At the beginning of 2012, Owen said he wanted to focus more on growing Earthtone9’s Facebook Page, which at the time had a few hundred “Likes.”

He ran a campaign in February that allowed fans to download a cover song performed by Earthtone9.

At first, he didn’t do much to promote the Facebook Page. Since the Page was still relatively small, Owen’s initial campaign gained 18 new fans and 70 downloads.

The next time Owen ran a download campaign was in June. This time, he announced it in an email and there was a distinct difference: the campaign gained 92 new Facebook fans, was shared 18 times on Facebook, and the song was downloaded 221 times.

He re-launched the campaign on September 8 and gained 223 new fans in one month. This time, it was shared 29 times on Facebook and the song was downloaded 475 times.

“Things have really picked up momentum since the beginning of this year,” Owen says. “Our campaigns provided a distinct call to action, so if we sent fans to the Facebook Page from a flier or after a show, we could say there was a free single to download.”

Making an album, with a crowd’s help

Email helped keep Earthtone9 top-of-mind among fans and Facebook acted as a catalyst for spreading the word and getting the download to fans, who could then share it with their friends.

This growing audience helped when the band asked for help from fans to record their first full-length album in a decade, because now, instead of a few hundred people, Earthtone9 had over 6,000 email contacts and over 2,000 Facebook fans.

In just three weeks, Earthtone9 finished their Pledge Music campaign and then some, reaching 114% of the fundraising goal.

“Fan funding is a whole new online concept that’s just getting started,” Owen says. “As we do more shows and add more email addresses to our list, we continue to grow influence.”

He adds that Pledge Music allowed Earthtone9 to raise “some serious money” that has let them have total creative freedom of their new album and its production, with enough to spare to create a music video for the new single. For the first time in about eight years, Earthtone9 is going to release a new album, in large part thanks to the fans that never forgot them.

Both small businesses and nonprofits can learn from Earthtone9’s example, because it shows how effective content (in this case a free album and the fan-funded EP) can be in capturing potential customers and supporters, as long as you have a way to follow up with them afterwards. That way, you can stay in touch and top of mind so, when you do have something to offer or a fundraising goal to make, you have a whole group of people already there to help.

I love to hear the stories of small businesses & organizations who are using Constant Contact creatively and effectively. I also run...