Connecting Is Not Enough: It’s a Question of Trust

This is a guest post by Andy Lopata, Business Networking Strategist. We our pleased to welcome him to our panel of experts for Social Media Week London. 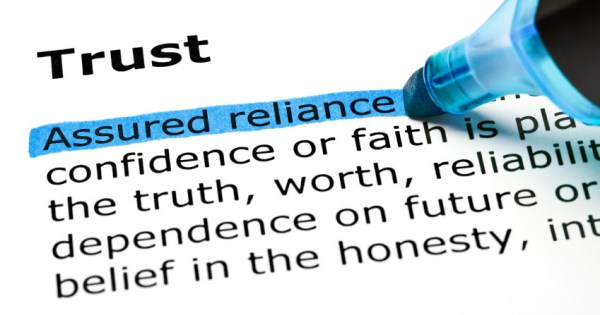 This article is part of our series for Social Media Week London. Read all the posts in this series.

It wasn’t what he expected to hear, that’s for sure!

The expression on his face was—to say the least—interesting.

I decided I owed him an explanation.

“This is where so many people get it wrong,” I went on to explain. “When someone says they don’t trust us, we take it as a sign of distrust. We paint everything in black and white. We either trust someone or we distrust them. But that’s not the way things really work.”

“In fact, we all start out either at, or close to, trust neutral. When we first meet someone we don’t have strong enough grounds to any strong feelings of trust either way. Trust is based on evidence; we need to have grounds to decide whether or not we can put our faith in someone.”

Trust has to be earned

This concept of trust is key to networking effectively in many ways. There are still far too many people who go to events and expect trust instantly, without earning it. At the other end of the spectrum, there are those who can’t see the point of networking with strangers and who won’t open their networks to them.

You have to find a balance. Don’t wade into networking events and just expect people to buy from you or connect with you because you’re there.

Trust has to be earned.

Networking is a two-way street — take down the barriers

If networking is going to work, there needs to be a willingness to trust earlier than you would normally. Networking groups bring people together to provide focused support, whether in terms of sharing contacts, ideas, expertise or experiences. In normal circumstances, what you share in a networking group is reserved for people you know very well. But networks can’t work effectively if no one gives into the process without some degree of implied trust.

For me, a classic example is people who join LinkedIn and then proceed to hide their network from the people they connect with. The whole purpose of LinkedIn is to share connections. If you have issues with implied trust, only connect to people you do trust. But be ready to share with them. Without that, you are limiting the network’s effectiveness.

When I attended NRG Metropolitan, a monthly networking group for the first time, I already knew some of the people in the group, which gave me a good start in terms of winning the trust of the people there.

I walked out of the meeting with three very promising appointments and congratulated myself on a job well done. Initially I had just gone to the group to take a client who might find it useful to join and to see if I could recommend it. The three meetings were a bonus.

Then, I stopped to think…

I looked at the chemistry between the members there, which was clearly very strong. I recognised that the group was packed with strong networkers, who understood the value of helping each other. And I could see clearly that there was a high level of trust between them.

It became clear to me that this group offered more if I committed to regular attendance, so I decided to join.

When I went for the second time, I was offered the opportunity to give a two minute presentation about my business. I told rather than sold, shared some information about what I do without asking for anything in return, and between the meetings I had 1-to-1s with two of the members and arranged two more for the next month.

Building trust takes time. I don’t go into the group expecting business or referrals straight away, but recognise that the potential is huge if I commit and earn that trust.

So for now—I’m pretty sure they don’t trust me, but they don’t distrust me either. And I’m OK with that. Some things are worth the wait!

Constant Contact’s Social Media Week London event on Thursday is sold out, but you can watch via this livestream link.

Labelled “Mr Network” by The Sun, Andy Lopata was called one of Europe’s leading business networking strategists by the Financial Times. Andy is the author of three books on networking, as well as a blogger for The Huffington Post and NatWest Business Sense. Andy’s second book “…and Death Came Third!” reached number two on Amazon on launch, while his third book “Recommended: How to Sell Through Networking and Referrals” reached number one in the business charts at WH Smith Travel shops. For eight years, Andy was Managing Director of UK networking organisation Business Referral Exchange.  Andy has since spoken internationally and worked with companies from one-man bands to organisations such as Deloitte, Merrill Lynch, and Mastercard to help them realise the full potential from their networking. He is also a Fellow and a former vice-president of the Professional Speaking Association.

I am the Senior Development Manager here at Constant Contact UK. My time is spent zooming around the UK delivering the free...