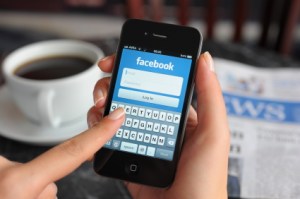 Small businesses have dealt with plenty of Facebook changes in 2012.

From new features to a completely new look—you have taken these changes in stride and done your best to adapt to a changing social landscape.

But if there’s one change small businesses can be happy about it’s the surge in mobile activity that’s taken place over the last year. Today, 150 million people will visit a Facebook Page—nearly half will do it on a mobile device.

Plus, find out which social network grew the most in 2012 and which two sites just can’t seem to get along.

Speaking at this week’s BIA/Kelsey’s Interactive Local Media show, Facebook Director of Global SMB Markets, Dan Levy announced that of the 150 million people visiting Pages each day, nearly half are doing so on a mobile device.

Bottom Line: With more than 60% of all users now connecting to Facebook via a mobile device, it’s no surprise that mobile traffic to Pages has reached an all-time high.

But all this mobile Page traffic does present one big problem for businesses on Facebook: Facebook tabs cannot be seen on mobile. This is a huge audience you could be missing, and a problem that we wanted to solve.

2. Pinterest saw more growth than any other social network in 2012

2012 has truly been a landmark year for the folks at Pinterest.

Pinterest saw an astounding 1,047% increase in unique PC visitors and a whopping 4,225% increase in mobile web usage. Pinterest also saw good results in the amount of time being spent by users on the site—ranking 4th in total minutes used on mobile apps.

Bottom Line: Its surge in popularity is just one of the reasons why Pinterest is a powerful tool for small businesses. The social media landscape is changing and Pinterest has proven it belongs in the same conversation as sites like Facebook, Twitter, and LinkedIn.

Find out how you can drive social visibility and new business with Pinterest, download our free e-Book.

Instagram announced this week that it has pulled its integration with the Twitter “cards” display format, making it much less enjoyable to view photos on Twitter.

Users can still click-through to view photos on Instagram, but the experience of viewing photos within their Twitter news stream looks to be at its end.

Bottom Line: Instagram CEO and co-founder Kevin Systrom had this to say about the decision:

“A handful of months ago, we supported Twitter cards because we had a minimal Web presence. We’ve since launched several improvements to our Web site that allow users to directly engage with Instagram content through likes, comments, hashtags, and now we believe the best experience is for us to link back to where the content lives.”

With over 100 million active users and more than half of the world’s top brands using Instagram for their marketing efforts—Instagram has every reason to want to drive traffic to its own web properties.

One way to avoid having your pictures show up distorted on Twitter is by uploading them straight from your mobile device, rather than automatically tweeting every picture from the Instagram app.  Until a better solution is available, it could be worth the extra step.

Looking for something to do this weekend? You may want to check out Foursquare.

Foursquare announced this week that they will now let merchants promote their in-store events via the mobile app.

Previously, events on Foursquare were limited to major sporting events, movies, or concerts. With this update, local businesses will be able to create a special event and have it promoted to people checking-in around their place of business.

Bottom Line: Foursquare has worked hard to redefine itself over the last few months—moving away from being known as a “gaming” or “competition” app to a discovery app for local businesses. Foursquare is dedicated to providing small businesses with a tool that helps consumers in their area find their business and discover all they have to offer.

With a majority of mobile searches already being done with local-intent, they are well positioned to do just that.