Like never before, social media has become an integral part of any marketing strategy.

Small businesses and organizations are constantly told to make a Facebook Page, create a Twitter handle, and join LinkedIn.

Of course, after nodding sagely and setting up those profiles, the big question becomes … What does my business or organization do now? The answer is less complicated if you have an easy-to-sell product or service, but if your business or organization is more specialized, then it can be a challenge coming up with a reason to justify the use of social media.

Most small businesses and organizations depend heavily on word of mouth to attract new customers. The bottom line is that social media, along with email marketing, is the new word of mouth.

Over the next few weeks, we’re going to show you just what business owners are saying about — and with — social media. Today, we’ll start by taking a look at a specialty beer store, a swim club, and a learning program for preschool children.

We featured 99 Bottles in our October Hints & Tips newsletter, in part because we were so impressed by the social media savvy of the beer store. Co-owner Tiffany Adamowski explained to us that one of the keys to success is knowing that “there’s a difference between Facebook, Twitter, and email marketing in terms of who you’re reaching.”

“Facebook and Twitter are geared toward what’s happening this moment – right now!” Tiffany says. To that end, she makes sure she’s serving up fun, bite-size, and easily shared content on the 99 Bottles social media pages, such as articles about beer and pictures of the store’s events and newest brews. She also makes sure she is always responding to people’s comments.

“I try to keep it all friendly, factual, and honest,” Tiffany says. Just one look at the thousands of people who have followed and Liked 99 Bottles on social media proves that these efforts have paid off … although it probably doesn’t hurt that most everyone likes a little beer once and a while. 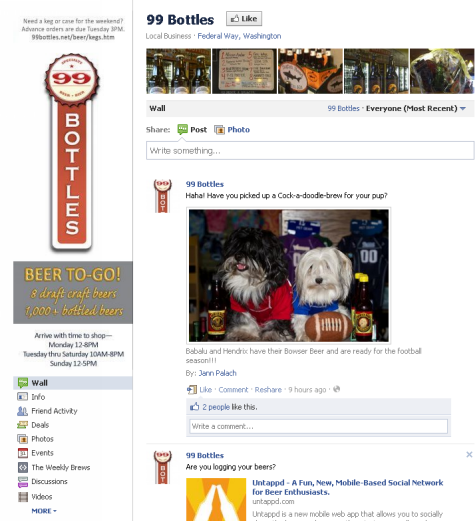 Let’s turn our attention to a much smaller organization: the High Point Swim Club, a nonprofit that teaches swimming lessons, hosts races, and is home to quite a few swim teams. Head coach Aaron Reeves says that the club uses social media as a means to boost team spirit, recognize outstanding athletic achievements, and offer discounts.

“We use Facebook to promote specials,” Aaron explains. “We’ll say things like, ‘Give us five reasons why you like High Point Swim Club and the first three people to comment will get a discount on lessons.’”

Facebook, especially, has proven to be a good way to spread the word about the club, which has a tight budget that doesn’t allow for direct mailings or other traditional advertisements. But through social media, as well as email and event marketing, Aaron says that the club has been able to keep costs low while still reaching out to members and prospects. 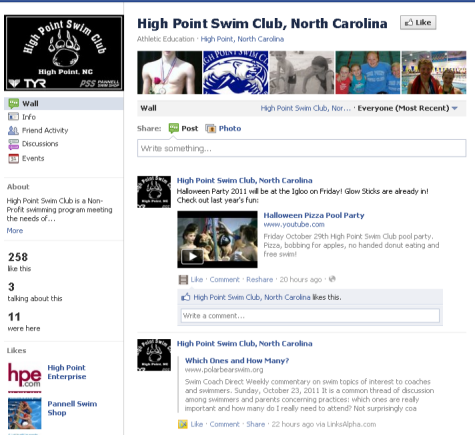 Little Sprouts, the winner of the Greater Boston Chamber of Commerce’s Small Business Award, is a learning program for young children that has 13 different locations across Massachusetts. Facebook has become a highly useful tool for involving parents in the organization’s day-to-day activities and the latest news — but it wasn’t always that way.

The challenge, says marketing communications specialist Shinnon Fakhri, is that the Little Sprouts “product isn’t really tangible.” It’s harder to offer deals or discounts, because there’s no food or shiny new items to give away. Instead, they’ve had to get creative.

“We had one competition where teachers would post activities the class was doing, and we said that the school whose activities got the most ‘likes’ would get a prize,” Shinnon says. “This year, it was a field trip.”

For Little Sprouts, sharing with families has become the key to success. “We engage fans by sharing photos, videos, back-to-school and family moments, and child milestones, like someone’s first steps or a first bike ride,” Shinnon says. Each Little Sprouts learning program has an individual Facebook Page, where parents can look at photos of their children in the classroom and learn more about the curriculum. 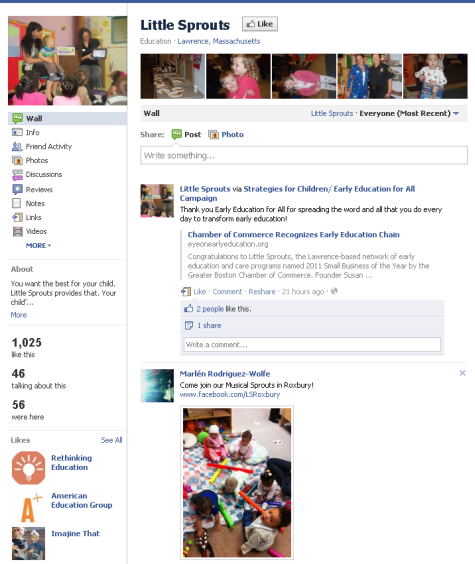 Have you found success on social media? Share your story here in the comments below and you may be featured in a future blog post.

Social Media for Lawyers: Why It Matters and How to Make It Work

To keep your practice healthy, you need a steady stream of incoming clients. That means consistently getting the word out there about your Read More >>

Before you cast Pinterest aside as a space for DIY crafters and amateur chefs, consider this: according to Hootsuite’s research, 90 percent Read More >>

When looking for a financial advisor or institution, most businesses and people begin by looking online. According to Google, mobile searches Read More >>