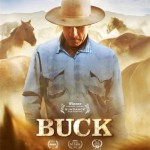 It’s a staggering number, especially considering that there aren’t really any discounts or coupons that Connecticut-based Cedar Creek Productions can give to fans of the Page. People who Like it have to be passionate about the movie and the Page’s content.

Some of Buck’s Facebook announcements — whether they’re about awards, screenings, or other events — get 50 Likes or more, which is a testament to the passionate fan base the movie has attracted.

When a new visitor arrives at the Page, the movie trailer immediately starts playing. There’s even a review feature that lets individual Facebook users award the film starred ratings.

To further spread the word, the Buck Facebook Page itself Likes a number of Facebook Pages, too, many of which are for riding academies and equestrian interest groups — Pages that are bound to attract horse-lovers, cowboys, and cowgirls, who should also love the documentary.

While it doesn’t hurt that Buck has won more than a dozen different awards for its telling of cowboy Buck Brannaman’s emotional life journey, Pam Miles, the executive assistant to director Cindy Meehl, points to one specific tactic that has seen an enormous amount of success: the film’s “You’ll Hear It Here First” campaign, which it uses to promote its email newsletter.

For this campaign, Pam got together with web developer and solution provider Terry Lalso, of Wingcat Web Design.

“We use Facebook to promote the newsletter and direct fans to our website for subscriptions to it,” she explains. Cedar Creek Productions promises Facebook fans that anyone who signs up for the email newsletter (which is sent through Constant Contact) will hear about the latest interviews, screenings, and more — before the information is posted to social media. Hence, the “You’ll Hear It Hear First” slogan.

The buzz this strategy has generated has encouraged thousands of people to sign up for the email newsletter and many others to eagerly wait for the news on Facebook. It also helps ensure that subscribers carry the conversation from the newsletter to social media channels. Pam shares most emails through Twitter and Facebook eventually, and says that many readers tweet the newsletters to their friends, spreading the word about Buck even further

The “You’ll Hear It Here First” campaign has been successful and crucial for Cedar Creek, since the company has very little room in the budget for traditional advertising. .

“I can easily say that we have received 50% of our leads from email and social media,” Pam explains. As screenings continue around the world, the email newsletter has become international and the Buck Facebook Page continues to accumulate fans. Just one look at the Page today shows not just how Buck has touched people all over the world, but also how the film’s creators have used social media and email to encourage fans to come together as a community and celebrate the experience.

How have you used social media and email to create a community of fans? Let us know in the comments section below.

10 Things You Need to Do Before Starting Your Own Business

What Consumers Will Care About in 2021

How to Support Your Community this Giving Tuesday

It goes without saying that 2020 has been quite the year.  In fact, you’re probably sick of hearing things like “in these Read More >>