The worldwide headquarters and distribution center of Cynthia Berman’s D-Lux 57 fashion aprons is the living room in her Los Angeles home. That means that she doesn’t have a whole lot of time for any kind of advertising, and she cuts her overhead costs as much as possible. Last March, email marketing was dropped from that list.

“I hadn’t used it for a while, and wasn’t really sending newsletters every month, so I decided to stop using it until I figured out what I was actually doing with it,” Cynthia says.

This month, Cynthia returned to email in a big way. She coupled two issues of her newsletter with Facebook posts, and in the process, gained 200 new “Likes,” higher user engagement, and most important, more sales. 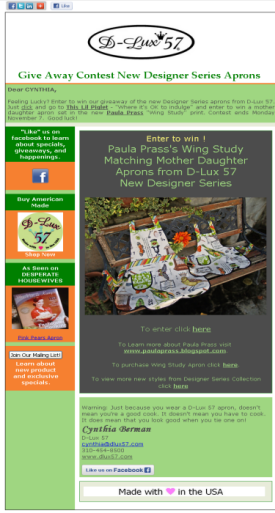 The Summer of Social Email

It all started last summer, when Cynthia decided to attend a workshop on social media and email marketing in Santa Monica, Calif., that was being presented by Constant Contact Regional Development Director Kelly Flint.

“The workshop really helped me realize how important Facebook Pages were,” Cynthia explains. While she had already had a Page in place, she admits that she “hadn’t done anything with it.”

So, in early November, Cynthia decided to try something new — hosting a concentrated campaign across email and Facebook. The campaign featured a series of photos and descriptions that focused on different textile designers whose beautiful prints were on the D-Lux 57 aprons.

Cynthia posted about the series on Facebook, a few days before launch, then sent a newsletter about it on November 2. On November 3, the campaign officially kicked off with a blog post on This Lil Piglet, a blog about parenting, and offered free giveaways for some lucky readers.  Cynthia sent another email newsletter on November 4 that promoted the giveaways and also started to promote the event on Facebook. 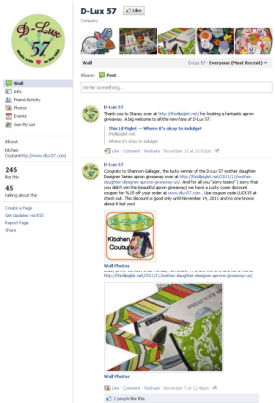 The D-Lux 57 Facebook Page features pictures of aprons and prints.

The New Importance of Campaigns

As email marketing becomes more integrated with social media, it’s important to note what a coordinated campaign can do. “What I love is that Constant Contact embraces social media,” Cynthia says. Since the workshop, she has taken advantage of the SimpleShare feature, which allows her to post her newsletters on Facebook, and is already planning another similar campaign for Christmas.

Cynthia’s email and social campaign demonstrates the power of combining these two tools, especially considering that she hadn’t touched email marketing since March. Cynthia says that, by “reminding customers of her existence,” apron sales have gone up and more people have started to call her to ask about the product.

One campaign certainly made a difference. Now the question really is, what will another do?

Has your business seen success from an email & social campaign? Let us know below or on our Facebook Page and you could be featured as a customer success story!

It’s no secret that it’s getting harder for businesses to get their posts seen in Facebook’s news feed. Increasingly, the platform has Read More >>