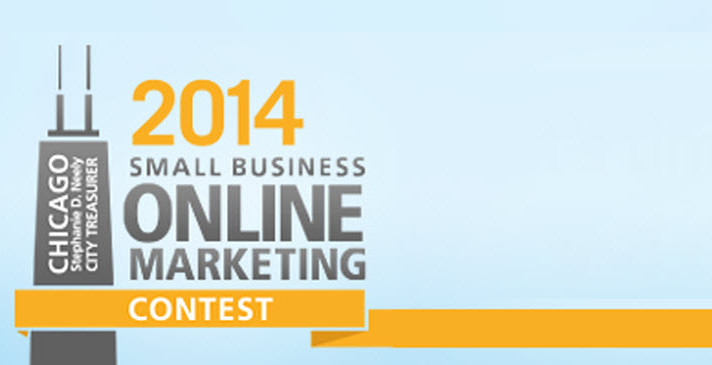 Each year, the Small Business Online Marketing Contest hosted by the City of Chicago Treasurer’s Office, provides incredible examples of how small businesses can use marketing channels like email and social media, to run successful campaigns that attract new customers and help them do more business.

This year, Constant Contact was a proud sponsor of the event.

Here’s a look at this year’s top winners, and what you can learn from the success of their campaigns:

Motion PR is a Chicago public relations agency whose heart and soul is unparalleled excellence in media relations.

In addition, Motion PR wanted 500 individuals pledge to add tree nuts into their diet for their 2014 New Year’s Resolution.

Nut Year’s Resolution required users to like the Nut Health Facebook Page and make a pledge to add 1.5 ounces of tree nuts into their diet in 2014.

Users earned additional extra entries by tweeting out a message that they joined the Nut Year’s Resolution, or by following Nut Health on Twitter and Pinterest. Each person that enters could win a $100 Whole Foods gift card, which is just another example of how the campaign encourages people to eat healthy and include tree nuts into their diet.

The Nut’s Year’s Resolution provides an excellent example of how small businesses can use multiple social media channels to promote their campaign. While the campaign was focused primarily on a Facebook audience, Motion PR was able to drive the most action when they involved other sites like Twitter and Pinterest, as well.

When running a campaign for your small business, it’s important to lay out your promotional strategy before hitting send. Think about the different channels you’re using to communicate with your audience online — whether that’s through social media, email, mobile, or on the web.

Established in 2005 by architect Annie Mohaupt, Mohop is an eco-friendly footwear company specializing in interchangeable shoes that allow nearly infinite design options with just one pair of soles. A socially-conscious company, Mohop ensures that all collections are produced with sustainably-sourced, recycled, and/or fair-trade materials.

The primary goal of the promotion was to raise $50,000 for their Kickstarter campaign to increase manufacturing capabilities. Secondary goals include obtaining new followers through the various social media channels they use, gaining new customers, and getting national and/or international press for the company and their mission. Finally, the promotion was to test proof-of-concept for both their in-house marketing skills as well as consumer demand for their product.

Mohop’s campaign centered around a campaign on Kickstarter— a crowdfunding website where an individual or business seeks financial contributions from the public for a creative project. Typically rewards are given to contributors that back the project: a DVD of a short film; a MP3 of a musical recording; or in Mohop’s case, a pair of sandals.

Their most successful promotion was through Facebook, specifically when they posted photos of their sandals and wrote a message like: “Support American artisanal manufacturing by SHARING our Kickstarter campaign!”

The campaign ended up in the top 1.2 percent of highest-funded fashion Kickstarters ever, with a total of $67,020 raised in 45 days. Mohop exceeded their goal by 34 percent and increased sales by 1,045 percent over the corresponding 45 days from the previous year.

Following the campaign, their sales are currently close to double that of this time last year. Even though they’ve dialed down their marketing efforts and are selling sandals during one of the coldest winters in recent history!

One of the most important factors in the success of this campaign was the power of word-of-mouth.

As Mohop promoted the campaign through its different channels, they began to see their reach extend beyond their current network of fans, followers, and email contacts. People weren’t just getting involved in the campaign, but they were also talking about it — posting about it on social media, and spreading the word through offline conversations.

When planning your next campaign, think of ways you can use the power of word-of-mouth to encourage shares and get your message in front of a wider audience.

Located in the heart of Andersonville, Milk Handmade is a women’s clothing boutique that specializes in small-run, handcrafted goods.

Milk Handmade planned a Secret Sale that allowed email subscribers to take 50 percent off everything on the sale rack. When they came into the store they had to mention that they were there for the Secret Sale, and then they would be rewarded with an exclusive discount.

Not wanting to distract from the promotion, Milk Handmade kept the email short, simple, and clean — including just one photo of an item that would be included in the promotion.

The goal of the campaign was to reward loyal customers who shop often, as well as customers who don’t come in as often but continue to subscribe to the store’s email list. It was also an opportunity to sell inventory, and prepare for an upcoming season.

The campaign had a 43 percent open rate, with a simple subject line, Our Little Secret.

The click-through was at 10 percent, even though the only link provided was to the website.

In the three days following the email promotion, Milk Handmade had nearly $1,000 of sales exclusively from customers who had received the announcement.

“Customers had an excellent reaction to it. They felt that they were getting special treatment and that they were being rewarded for subscribing to our email list, which was my initial goal. Additionally, customers who had not been in for a while visited and got back in the habit of shopping with us. The email had a great impact on our in-store sales, and helped to foster lasting relationships with our best customers.”

When creating your next campaign, start by thinking about your best customers and how you can create value for them.

Have you launched a successful marketing campaign recently? Tell us about it. What worked? What didn’t? What was the biggest lesson you learned from the results?