This is it — you’re on the home stretch of the holiday shopping season!

In a couple weeks we’ll be taking down the trees, putting away the decorations, and finally catching our breath after what has been a hectic couple of months.

But as you prepare for the last few weeks of holiday business (or if you’re a nonprofit, holiday fundraising and recruiting) take a few minutes to get caught up on all of this week’s online marketing stories.

It has certainly been a rollercoaster week for Twitter. After being dumped by Instagram just a week ago, they strengthened ties with Pinterest and rolled out some photo filters of their own.

Plus, two newsworthy studies gave both small business and nonprofits on Twitter a reason to celebrate.

On Monday, Twitter announced it was adding brand new photo filters to its iOS and Android mobile apps. The announcement came just a few days after Instagram pulled back its integration with Twitter, disrupting the way photos were showing up in users’ news streams.

With the new filters, Twitter users will be able to create Instagram-like photos and seamlessly upload to Twitter to share them with their followers. These photos will also be saved on the user’s mobile device after being uploaded.

Bottom Line: If you’ve been using Twitter to market your small business but have been reluctant to get started on Instagram, this is an opportunity to see what all the filter-fuss is about without having to learn a new tool.

Instagram has changed the way people think of photos and as a result, the bar has been set high for what type of images attract attention on social media. This is why Facebook released their own filters just a few weeks ago and why Twitter will likely continue to expand filter capabilities in the coming year.

Learn more about how to use Instagram to promote your business.

Just a few days after Instagram pulled back its integration allowing users to view photos on Twitter, Pinterest announced this week that it has deepened its ties with Twitter, adding a brand new photo integration.

Now, with the new integration, when a Pinterest user shares a pin on Twitter, followers will no longer have to click a link to pinterest.com or open the Pinterest app to see it. Tweets from Pinterest can now be expanded to let users see the pin, the name of the board, and the pin’s description.

Bottom Line: Pinterest’s close-ties with other social networks have been part of its appeal from the start. Being able to share pins on Facebook and Twitter makes it easier for users to get content in front of a wider audience and to grow their following on Pinterest.

Want to learn more about why so many brands are flocking to Pinterest? Download our free eBook, How to Drive Social Visibility and New Business with Pinterest.

Almost a quarter of the country’s top companies are now maintaining a separate Twitter account, exclusively for customer service. This, according to a new report from Simply Measured, which took a deeper look at the role of customer service on social media.

For consumers on Twitter, customer service has become even more of an expectation of brands using the site—with 32% saying they believe brands should respond to customer questions, comments, and complaints within 30 minutes of them being posted.

Bottom Line: Don’t worry—currently 0% of these brands are meeting the 30 minute expectation of their social audience. But over 90% are responding to questions, comments, and concerns within one day.

As a small business on social media, you won’t need a separate account to field customer service issues. It’s not realistic and in most cases, not necessary. But that doesn’t mean customer service shouldn’t be part of your social media strategy. It has been proven that when brands take the time to track and respond to questions on sites like Facebook or Twitter; customers are more likely to recommend them to their friends and to one day make a purchase from them.

Worried about how to handle negative feedback? Check out my interview with Constant Contact Social Media Specialist Kristen Curtiss about that very topic.

A new infographic from MDG Advertising takes a look at the year that was in social giving. According to the research gathered in the infographic, 2012 was a record setting year for organizations using social media to raise funds.

Here are a few more noteworthy stats about nonprofits on social media:

Check out the infographic for more!

Bottom Line: It’s no secret that sites like Facebook, Twitter, Pinterest, and LinkedIn have had a huge impact on the way nonprofits connect with supporters, donors, and volunteers. In 2012, more than half of nonprofits found social media to be one of their most effective marketing tools.

Find out how other nonprofits are using social media to engage, inform, and recruit volunteers.

5. One third of social media users unfollowed a brand for posting too much

According to a recent study from SocialVibe, 33% of users have unfollowed brands on social media for posting too many updates—making it the number one reason for ending social relationships.

Bottom Line: Unfortunately, there’s no steadfast rule for how often you should (or in some cases, shouldn’t) be posting on Facebook, Twitter, or any other social network. Instead, pay attention to how your fans are reacting to your frequency of posts. For some businesses, once a day will be more than enough; for others two or three posts will work. Watch how fans are engaging with your content and adjust your frequency accordingly.

Thinking of stepping up your social media marketing in 2013? Check out our free guide, 12 Awesome Facebook Marketing Campaigns. 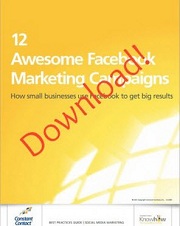