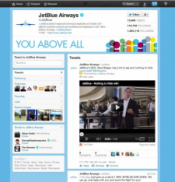 This week, Facebook and Twitter both released new features, though in the case of Facebook, it was in a limited release. Mark Zuckerberg finally let his site’s highly anticipated Timeline feature loose… but only in New Zealand. Meanwhile, Twitter’s new features seem to acknowledge that hashtags and constant @ing have made the social network less than intuitive for newcomers. New Twitter brand pages aim to make the site more attractive for businesses and organizations.

End-of-the-year predictions are also starting to emerge, with people pointing at cause marketing in particular as an emerging trend that could explode in 2012. It seems people like to shop at businesses that do good things for the community … Imagine that!

We cover these stories and more in this week’s breakdown of hot news topics.

This week, the social network announced a major overhaul of its interface across all platforms. New features include a homepage timeline, an improved way to see relevant tweets, and an easier way to find and use hashtags. Twitter also introduced brand pages, so businesses and organizations can have a stronger presence on the site.

Bottom Line: Twitter has already proven to be a popular way for businesses and organizations to better connect with customers; no wonder 76% of small businesses now say they use the social network. But now it seems that the goal is to simplify and streamline that process. A new interface means that Twitter will be more accessible than ever before, to both customers and organizations.

Cause marketing is when a brand supports a good cause or a social issue through a product, service, or endorsement. Cone Communications has been measuring the value of this strategy since 1993, and has found that its popularity is at an all-time high — 94% of those surveyed said they would choose a brand that supports a social issue over a competitor who had a product that was equal in quality and price.

Bottom Line: Cause marketing is a great way to improve business and help the community. It doesn’t have to complicated, either: An organization can provide a gift card to customers who donate to a charity or donate a dollar for every product purchased.

Amazon.com has released a new free app for iPhones and Android devices called “Price Check,” which guarantees shoppers a $5 discount off most products from a brick-and-mortar store.  While the online retailer says the app facilitates “price transparency,” the Retail Industry Leaders Association and the Alliance for Main Street Fairness are labeling the app a big threat to small businesses.

Bottom Line: The Price Check App could hurt sales at non-virtual stores, but Fortune estimates that the hardest-hit businesses will actually be large chain stores like Walmart and Target. Those kinds of stores will always compete on price. Small businesses offer something that online retailers can’t: Better customer service, expertise, and more personal relationships. In this competitive shopping season (and always!), that’s the advantage that will make all the difference.

Yelp has updated the features of its free mobile app so that business owners can create new pages on the go. The app also allows businesses and organizations to change hours of operation, address, categories, and upload photos right from their smartphone.

Bottom Line: More than 80% of Americans are influenced by online customer reviews. Many of those reviews can be found on Yelp, so coupling an engaging and helpful Yelp page with favorable reviews is becoming more and more important.

5. New Zealand Gets an Exclusive on “Timeline”

There was a lot of buzz in late September when Mark Zuckerberg announced Facebook’s new “Timeline” feature. Described as a virtual scrapbook of a person’s life, the feature enthused some and horrified others. But no one could have expected the holdup before it was rolled out to Facebook’s 800 million users. That is, except for the 1 million Facebookers  in New Zealand, who got exclusive early access to the feature this week. No one is quite sure what’s behind the general delay, but a glance at the comments on Facebook’s “Timeline” blog post can give some hints.

Bottom Line: Timeline could be the feature that never was. In fact, Facebook was sued for introducing it in the first place. Right now, it may be better to be aware of the addition, but not actively following the developments; the final product could look and function much differently than the New Zealand prototype.

What news topics caught your eye this week? Share your thoughts with us in the comments section below.

How To Use Social Proof To Boost Your Online Marketing

Have you ever been scrolling through Instagram and been drawn to a product you’ve seen repeatedly? Have you ever felt compelled to stop at Read More >>

Running a successful referral marketing program can be the big boost that your manufacturing operation needs. It’s easy enough to do, as Read More >>